FiveM hacked, shutting down, or discontinued? No, company responds to rumors

FiveM hacked, shutting down, or discontinued?

FiveM is among the most popular alternative role-playing and multiplayer mod for Grand Theft Auto Online. In fact, FiveM has a player base on Steam of 250,000 which is more than that of the base game.

However, a recent series of tweets has led FiveM users to speculate that the mod service might be shutting down, hacked, or discontinued.

Admit your socials were hacked.
Source

Admit your socials were hacked. pic.twitter.com/PVTTr0cRGj

While the said series of tweets from the official FiveM handle have now been now taken down, users are still worried about the fate of the service.

Also, most FiveM users think that the social media handle for the mod service was hacked. Hence, the said series of tweets might have been the work of hackers.

Also read: Is FiveM shutting down?

A writer even shared that as per the moderators working with FiveM, this situation has nothing to do with Take-Two Interactive.

Attention: Regarding the FiveM situation, I’ve been told by one of the moderators who works with FiveM that it’s not anything to do with Take-Two.

Await for more info as it comes from FiveM themselves. I have no idea what’s going on either.

Moreover, many FiveM users are speculating whether the service is indeed coming to an end or some mischief is at play.

This is because a recent Reddit thread outlines that the FiveM executable (.exe) is taking players to the rage.mp web page. The same web page was also highlighted in the controversial series of tweets.

However, a FiveM Reddit community moderator has said that this is a known issue and FiveM has not been hacked. 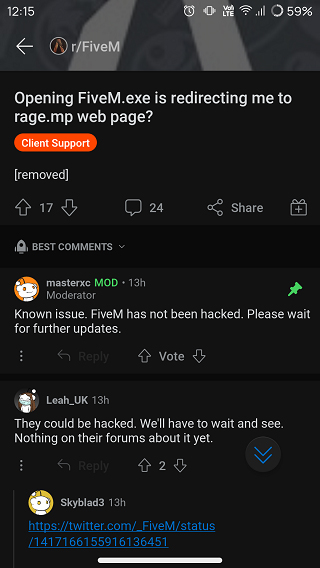 FiveM hacked, shutting down, or discontinued?

answer: Furthermore, FiveM has clarified the matter stating that the service is neither shutting down nor hacked. Moreover, the said series tweets was made by the FiveM dev lead who has been struggling due to increasing workload.

While the FiveM team is trying to help their dev lead to get over this burden, the said tweets certainly created big waves in the FiveM community.

So, players can now take a sigh of relief as the popular modding platform is not going anywhere anytime soon.

For what it’s worth: we’re not shutting down, nor were we hacked.

With the ever-increasing workload, however, it’s again proving difficult for our dev lead to work on the project, eventually leading to ‘this’.

Our team is still looking for ways to help them with this burden.

That said, we will report back with more details as and when new information becomes available so stay tuned.

FiveM hacked, shutting down, or discontinued? No, company responds